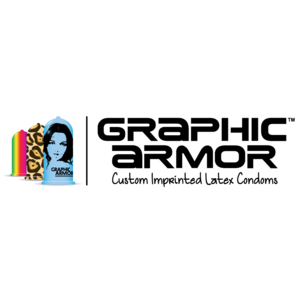 Let’s face it. Condoms can be embarrassing and socially awkward. The act of purchasing condoms is a public expression of your most personal activities: “I’m having sex!” (Or, “I hope to be having sex, soon.”) In fact, that embarrassment, along with the embarrassment of introducing a condom to one’s partner, are significant barriers to condom usage. Yet condoms are the number one solution for preventing STIs, including HIV, and unintended pregnancies, and the need for condom usage persists. Let’s get the alarming statistics out of the way:

Despite these realities, Dr. Tom Frieden of the CDC found that only 59% of high school students who had sex in the three previous months had used a condom.

While reversing these statistics is a significant challenge, Graphic Armor is poised to affect real change through the world’s first FDA-cleared condoms to feature high-quality graphics right on the latex. 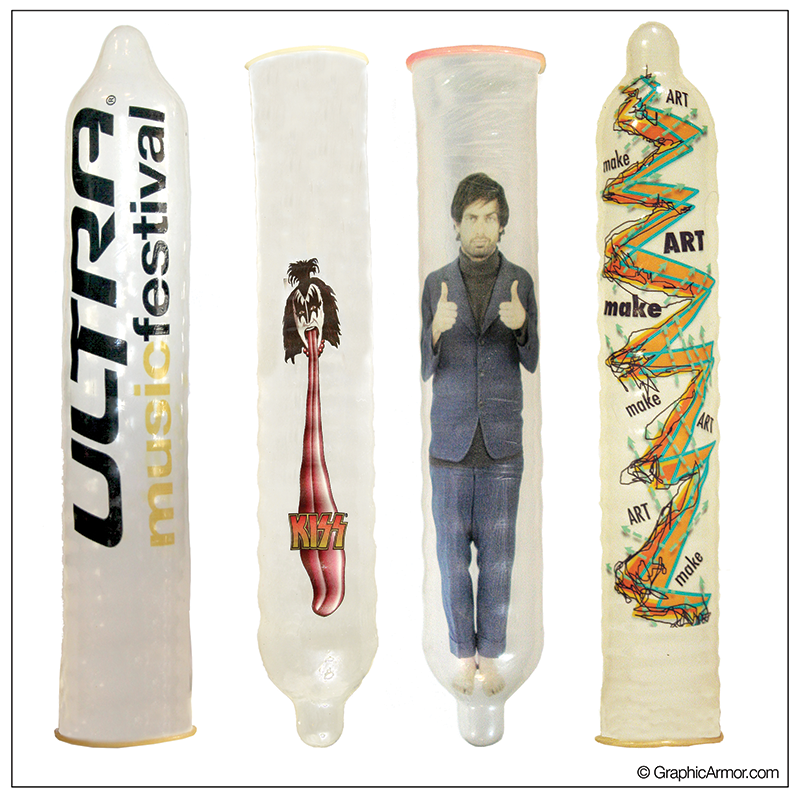 Animal prints? Corporate slogans? University or team mascots? Your friend’s birthday or bachelorette party? Check, check, check, and check. Corporations, NGOs, teams and individual consumers can put graphics, images, or text on an FDA-cleared condom through Graphic Armor’s user-friendly online Design Studio, and order as few as 33 condoms, or as many as tens of thousands. Graphic Armor finalizes the design proofs, oversees manufacturing at our state-of-the-art facilities, coordinates shipping and customs, and delivers high-quality, FDA-cleared custom printed condoms to the customer.

We also offer a line of pre-printed condoms such as our famous Star Wars parody condoms and flag condoms.

Yes, our company — and clearly our products — get a reaction. And that’s the point: We want to change the concept of using condoms from awkward or embarrassing to fun and even funny. If the experience of buying, and especially using a condom makes you smile, then we’ve achieved our mission. We are changing the way people look at condoms by changing the way condoms look.

Our CEO, Adam Glickman, is a pioneer in condom marketing and retailing with more than 30 years of experience in the business, starting when he was a student at Tufts University and through his founding of America’s first condom store, Condomania, in 1991. He has helped design, develop, manufacture, import, distribute and sell dozens of different condoms and related products. (More on that below.) It has literally been his life’s work to make condoms more accessible and accepted worldwide. 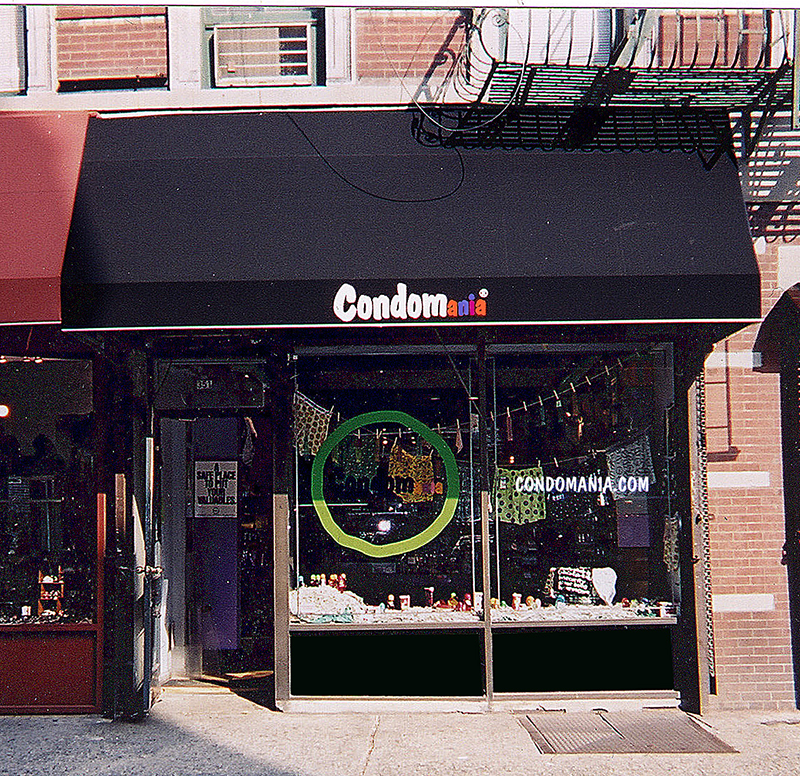 We live in a world of personalization and on-demand consumerism. Technology has made things possible that we couldn’t have imagined even 10 years ago. While branded clothing and other items featuring our favorite teams, universities, entertainers and corporations have long been a dominant force in retail, today, highly personalized custom clothing, shoes, mugs and phone cases enable a new level of consumer empowerment. People — especially the much-discussed and researched Millenials — express themselves through the products they buy, wear, carry and use like never before. Even tattoos are far more prevalent and “hip” as the desire for personal expression translates to body art.

Graphic Armor’s custom printed latex condoms and easy-to-use online Design Studio fit into this mass trend, giving individuals and organizations the opportunity to design relevant and compelling condoms that meet their respective needs and goals. Businesses and consumers can easily upload and create condoms with photo-quality artwork or text printed directly onto the latex, enabling a temporary expression of body art, if you will, showing team loyalty or expressing personal aesthetics in a whole new way.

And as noted above, for those who perhaps are a little less creative, Graphic Armor also offers a line of pre-printed condoms featuring funny graphics or patterns. 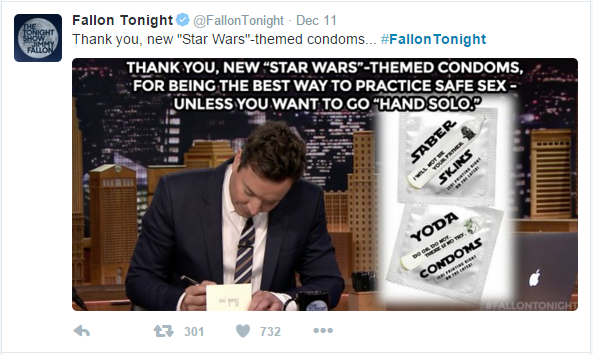 Adding familiar and fun graphics to the latex of a condom can instantly change the dynamics, whether the images are photos of friends (think milestone birthday parties), team mascots, a favorite band, or funky animal prints, the all-important moment of introducing a condom to a partner now becomes fun and lively, rather than filled with angst. In short, we believe that turning the condom into a canvas for personal and commercial expression can have real public health benefits at the micro and macro levels, from individuals looking to cast condoms in a new light and encourage use with their partner, to public health officials seeking new strategies to break down barriers and increase condom use across different demographic groups. 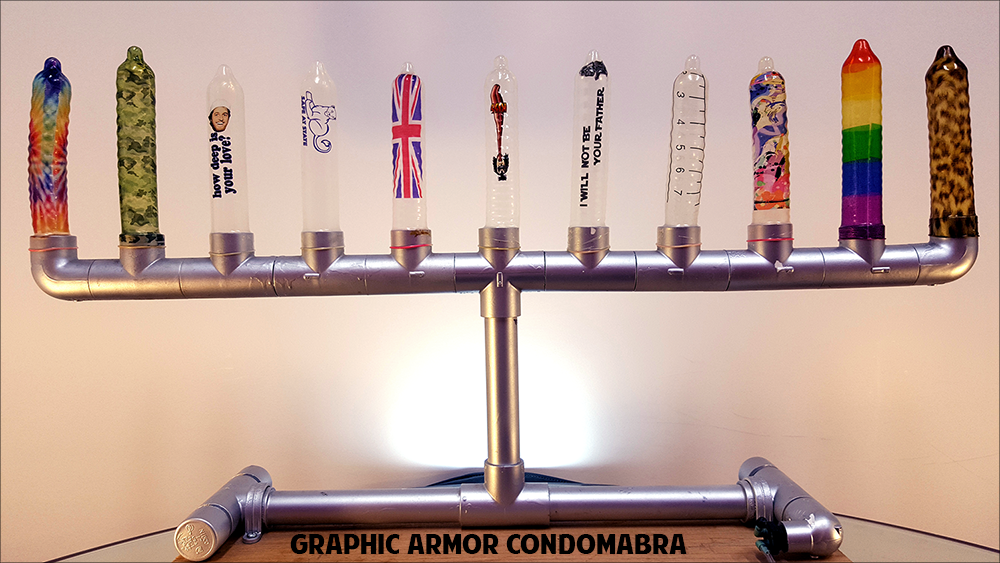 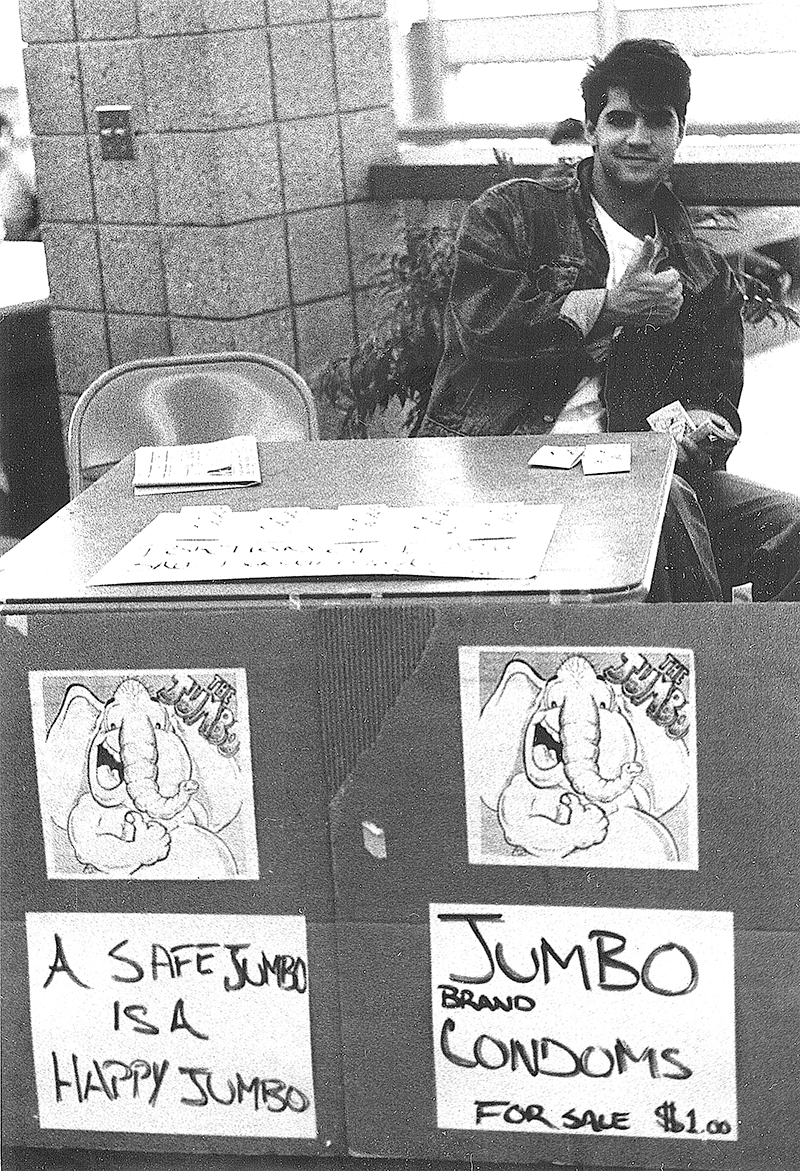 Starting more than 30 years ago, Adam Glickman, Graphic Armor’s CEO, sought to change negative attitudes surrounding safer sex (and make a little cash) by creating and selling condoms packaged in matchbooks emblazoned with a cartoon version of Tufts University’s mascot, Jumbo the elephant. Glickman ended up selling 1,000 Jumbo Brand condoms (“A Safe Jumbo is a Happy Jumbo”) in two weeks for a $1 each.

Glickman went on to make custom condom matchbooks for other universities, bars, radio stations, entertainers and other businesses. After graduating from Tufts, Glickman opened up the country’s first condom store in 1991, Condomania, located in New York’s West Village, followed by additional locations in Los Angeles, San Francisco and Miami. At the beginning of 1996, Condomania became one of the first 100 sites on the Internet to feature a shopping cart.

Shortly before selling Condomania in 2012, Glickman teamed up with two entrepreneurs who had been pursuing a new idea for condoms: printed condoms. While Glickman has consulted with dozens of condom producers over the years, he immediately realized the synergy between their printed condom concept and his own original foray into the field with custom-printed matchbook covers. By the time they partnered with Glickman, Chris Panucci and Bill Kurtzner had created prototypes of their concept and secured a manufacturer in China; Glickman then leveraged his extensive expertise to bring their concept to market. For the past four years, the team has spent thousands of hours and significant resources to refine the design, set up manufacturing capacity, ensure seamless import/shipping/delivery, and obtain critical FDA 510(k) clearance for the world’s first printed latex condoms.

Over the course of several years, Graphic Armor has developed a unique technology to print non-toxic inks directly on latex condoms to produce near photo-quality images on FDA-cleared products. (Note: condoms are regulated by the FDA as class II medical devices. While this clearance only applies to condoms distributed in the U.S., consumers worldwide often recognize the significance of having met the FDA’s rigorous standards.)

Graphic Armor also has developed methods to print on 90% of a condom’s surface, creating custom printed condoms with virtually full print coverage. In addition to these two processes that have never been done before, Graphic Armor also offers customers the ability to print on the condom foils, either with or without latex printing.

The global condom market is about $5 billion annually. However, Graphic Armor’s custom printed condoms transcend FDA-cleared “medical devices” to promotional items, which, according to the Specialty Advertising Institute, is a $21 billion market in the U.S. alone.

To our knowledge, Graphic Armor is the only company in the world to offer FDA-cleared condoms that feature photo-quality custom print right on the latex. We are not aware of any potential competitors, and notably, the time, expense and effort required to secure FDA 510(k) clearance is significant.

Graphic Armor’s exclusive introduction of this novel product is poised to capture a significant percentage of the potential market.

As publications such as Forbes have noted, “socially-conscious” or “socially-responsible” investing has gained popularity, particularly with Millenials. Graphic Armor offers a unique means of participating both in the rising consumer demand for personalized and branded products along with being a part of a socially-conscious company that is designed at its core to positively impact human health and behavior in a way that quite literally can save lives.

A multi-faceted marketing plan aims to increase sales growth and expand our impact globally. Strategies include:

High-Profile Brand Partners: Graphic Armor intends to target high profile brands including corporations, universities and schools, sports teams, music artists/pop stars, and other celebrities to create their own custom-printed condoms for sales and promotional use. To help reach these customers, Graphic Armor has recently joined ASI (Advertising Specialty Institute) as a supplier, exposing the company and its products to over 3,000 distributors of custom promotional items. One of our enterprising young customers is already creating several college-themed designs that he and his friends are selling on college campuses. These partners will both increase sales and create substantial exposure for Graphic Armor’s customization platform.

NGO Partners: We also will solicit well-established public health organizations, such as those combating the spread of HIV and AIDS globally, to create custom-printed condoms for use in their efforts. A customer in Australia has designed rainbow-flag condoms for distribution in the gay community. Our custom-printed condoms can provide NGOs and global public health officials with powerful new strategies to increase condom usage in targeted demographic groups.

Pre-Printed Designs: Currently, Graphic Armor has eight condoms with unique pre-printed designs, including two parody Star Wars condoms, a condom with the British Flag, a condom featuring all-over camouflage and another with an all-over Tie-Dye design. We plan to introduce many more designs to sell directly to consumers, increasing awareness of the product and our customization services.

Small Batch Printing: Thanks to efficient manufacturing processes than enable us to cost-effectively print a customized batch as small as 33 condoms, Graphic Armor will expand targeted advertising and marketing efforts (including PR) to reach consumers who want small orders of personalized condoms. Bachelor/bachelorette parties, birthdays, and other event-related marketing along with widespread PR (Glickman has been featured to date in thousands of print, television, radio and internet spots relating to condoms throughout his career) will increase Graphic Armor’s market presence. Already, artists and gallery owners have ordered condoms to promote their work.

Graphic Armor sells and ships condoms to customers to virtually any nation globally; to date, approximately half of our direct to consumer sales have been from customers outside of the U.S. These customers, whether purchasing our pre-printed condoms or small batches of custom orders, pay directly upon submitting their orders, either via Paypal or credit card, with a shipping cost added to the cost of the merchandise.

Orders for contract produced products (B to B), including custom printed condoms and standard condoms (non-printed) with custom printed foils, require a minimum of a 50% deposit upon placing the order, with payment in full due prior to the order being shipped. Orders range from a minimum of $99 to thousands of dollars for large orders. Order processing time on custom-printed condoms depends on the size of the order, but ranges from a few weeks to a few months for particularly large orders.

Graphic Armor oversees the finalization of designs with customer approvals, the manufacturing process, and all shipping/delivery to the customer.

Investing in Graphic Armor is more than supporting a promising company with a proven concept; it is about making an impact on a critical global issue. By purchasing shares in Graphic Armor, we believe you are contributing to the health and well-being of people all over the planet in a fun and meaningful way. Together, we can remove the social stigmas that still surround the use of condoms and help save lives.

Summary:
Let’s face it. Condoms can be embarrassing and socially awkward. The act of purchasing condoms is a public expression of your most personal activities: «I’m having sex!» (Or, «I hope to be having sex, soon.»)