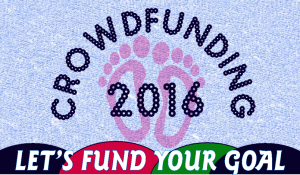 Now a Doormat for Everyone to Share the Spirit of Crowdfunding!

The goal of this global campaign is to foster greater awareness, and innovatively share the spirit of crowdfunding and the endless possibilities it brings, and continues to bring, to everyday people around the world. This is the ultimate campaign of all crowdfunding campaigns because it is targeted at building awareness to further promote the crowdfunding industry.”

Dating back to 1445 BC when Moses, the leader of Israel, crowdfunded the first Tabernacle in recorded history, it has become overwhelmingly evident that crowdfunding can empower any individual or team to achieve any set business goal, personal dream or social cause.

Crowdfunding as an alternative financing model came into the public consciousness in the US when ArtistShare was launched in 2003, providing musicians a platform to seek donations from their fans to produce digital recordings. ArtistShare’s first crowdfunding project was Maria Schneider’s jazz album “Concert in a Garden”, which was sold exclusively through ArtistShare’s website and won a 2005 Grammy for best large jazz ensemble.

In 2005, EquityNet was launched as a platform for startups and medium-sized businesses to raise equity capital from a crowd of accredited investors, even before the word “crowdfunding” was first used. Fueled by the pristine success stories, more rewards-based crowdfunding platforms were soon launched, the most prominent of which today are Indiegogo (launched in 2008), and Kickstarter (launched in 2009). These popular crowdfunding sites have been joined by a host of others.

One of Kickstarter’s most wildly successful and famous campaigns was the 2015 Pebble Time smart watch campaign. The Pebble watch team sought $500,000 in funding, reaching that goal in only 17 minutes, $1M in 49 minutes and $10.3M in two days. When the campaign ended, the company raised $20.4M making it the most funded Kickstarter project to date.

The most successful crowdfunding venture outside of the United States is an Indiegogo crowdfunding campaign for the Flow Frame self contained beehive system which allows beekeepers to harvest honey without disturbing the hive. This campaign’s funding target was $70,000, which the campaign raised in only eight minutes. After reaching $1M in pledges and pre-sales within three hours, the company set a single day crowdfunding record by achieving $2.18M at the end of the first day.

Given the tremendous success and astronomical impact of crowdfunding, it’s surprising that crowdfunding is still a relatively new concept to many people around the world, especially in the developing and under-developed societies; a situation that could set back the future growth of the industry. The challenge, therefore, is how to raise awareness, and foster more understanding of crowdfunding with the general public.

“It behooves the entire crowdfunding community and all industry stakeholders to take responsibility for promoting the possibilities that crowdfunding model offers individuals, businesses and our societies,” said Syllabus Onajobi, the organizer of the Let’s Fund Your Goal campaign.

Importantly, the essence of the Let’s Fund Your Goal campaign is to push the boundaries of crowdfunding awareness, seeking to raise $34,700 in funds for manufacturing at least 2,500 crowdfunding branded doormats and related promotional shirts.

The cheery, yet elegant doormat is a crowdfunding souvenir designed to succinctly share the spirit of crowdfunding everywhere, and anywhere it is used. It is important that many more people get enlightened about crowdfunding, and be inspired to explore the possibilities it offers in advancing their personal, business or social goal.

While I enjoy the creativity behind this campaign slogan, I implore you to also share the message in order to spread more awareness. By doing this, you can be the part of the solution. Many people, who are around you every day and whose lives can be empowered and transformed through crowdfunding, truly need the inspiration this campaign delivers.

Placing this welcoming doormat at a home or office, or proudly wearing the Let’s Fund Your Goal crowdfunding branded polo shirt or t-shirt, which are other perks of the campaign, create a lasting first impression, build awareness, and help everyone involved to pay the crowdfunding message forward.

Participation in the “Let’s Fund Your Goal” global campaign provides the perfect benefit for crowdfunding project creators, backers, donors, or investors, platform service providers, the media, and general crowdfunding enthusiasts to be at the vanguard of promoting the industry they all cherish.