Our moto is “American InnovationLighting the Future.” We are building on 7years experience of product development anddesign. We areon a mission to patent, license or domestically manufacture, and distribute specific new market nicheproducts to the world wide consumer market place.

Mitragyna Speciosa, also Known as Kratom is tree native to Southeast Asia, including Indonesia, Thailand, the Malaysian Floristic Region and several surrounding regions. The leaf of this tree is typically ground up and ingested orally and used for several medicinal purposes. These include, but are not limited toPain Relief, Decreased Anxiety, Mood Enhancement, Decreased Hypertension, Decreased Fatigue, Increased Focus, Relief of IBS (Irritable Bowel Syndrome), Increased Energy and many others.

This leaf has been used for centuries by the indigenous people to these regions for increased energy in low doses, sedation in higher doses, dysentery and pain relief. The leaf was chewed, crushed into a powder and ingested, made into a paste extract or boiled for tea and consumed.

Kratom effects the brains opioid receptors similarly to an opiate, although not classified as an opiate, which is responsible in the successful treatment of chronic pain sufferers. Kratom has been used as an aid for the management of opium withdrawal as well.

Kratom has seen therapeutic use in Thai ethnomedicine as an antidiarrhoeal, as a treatment for opioid dependence, and rarely to increase sexual performance. The general consensus in Thailand among public health officials, academics and policymakers is that the use of Kratom and its dependence causes little to no health risks.

All about one of our many new products: Kratom

Kratomleaves have had a wide range of uses, starting with the people of Southeast Asia who have known and utilized the benefits of this miracle plant for centuries. Its popularity has grown in the western nations of the world as more and more people are becoming aware of the versatility of this plant. In smaller doses kratom is known to cause pain relief, produce stimulation, mental acuity, a heightened desire to work, extended energy, fatigue relief, increased focus, increased social and communication skills, relief from depression and anxiety, and a feeling of euphoria.

Kratom taken in larger doses is known to cause more of a sedative effect in addition to pain relief or analgesic effects. Some of the most commonly reported benefits are listed below.

More recently reported benefits of Kratom include the relief of symptoms associated with drug (opiates) and alcohol withdrawals. Kratom has also been used for allergy and cold symptom relief, as a cough suppressant, fever reducer, to normalize blood pressure and blood sugar levels, to fight intestinal parasites, treat diarrhea, increase melanin production in the skin to aid in protection from the sun, and to prolong sexual intercourse.

A noteworthy benefit of Kratom use is in fighting immune system disorders. This may be due to Kratom’s rich, antiviral compounds which contain 20 times the amount of antioxidants found in green tea.

Kratom powderis generally stronger than crushed leaves because the stem and veins of the leaf are often removed, leaving the parts of the leaf which contain the highest amount of the active alkaloids.

TheStem and Veinis generally removed during the grinding of the leaf to produce powder, but still contains active alkaloids, although only approximately 25% of what the other leaf material contains.

This generally comes in a powder form and is a concentrated form theKratom, thus providing a stronger or enhanced effect.

The extracted alkaloids orConcentrated Kratom Powderis soluble in alcohol which allows for an alternative delivery system. Tincture droplets are delivered sublingually and have a strong effect.

Enhanced Kratomis often as simple as an extract being added to a regular strength powder. There are also some strains of Kratom that are overall stronger than others and these are sometimes referred to as enhanced.

This is basically what the title implies.Crushed leaf Kratomcontains all of the leaf material, stem and veins and is often used as a tea for the delivery system.

This is simplyPowdered Kratomwhich is packed into an ingestible capsule (Kratom Capsules) for a more convenient delivery method, thus the name.

There are 3 types of Kratom which areWhite Vein,Red VeinandGreen Vein. Many people say that Green and White are the same but they are not. You can, clearly, see the differences in the leaves in which White Vein tends to be white or beige in color and Green Vein is, of course, Green. You’ve probably noticed numerous names referring to the sameTypes of Kratomwhich can be entirely too confusing. Unfortunately, many vendors tend to confuse the customers by rebranding traditional strains with interesting new names. The traditional names for Kratom come from the regions inIndonesia,MalaysiaandThailand. The naming conventions include Sumatra,Borneo, Riau, Bali and so forth. Below is somewhat of an org chart for how these names are connected.

For an example, when you hear the term, White Vein Sumatra, you’ll now know that this is referring to awhite veined Kratom leaffound in the Sumatra region of Western Indonesia and simply put, White Vein Indo.

These names can sometimes be justified due to the different environments in which the trees are grown. Some regions have different soil compositions which can clearly have an effect on the alkaloids found in the leaf.

We are aware that these names can be confusing and there are not many concise descriptions available regarding this subject which is why we felt compelled to provide this information to our customers.

Maeng Da(not a region, but an enhanced version of Thai) 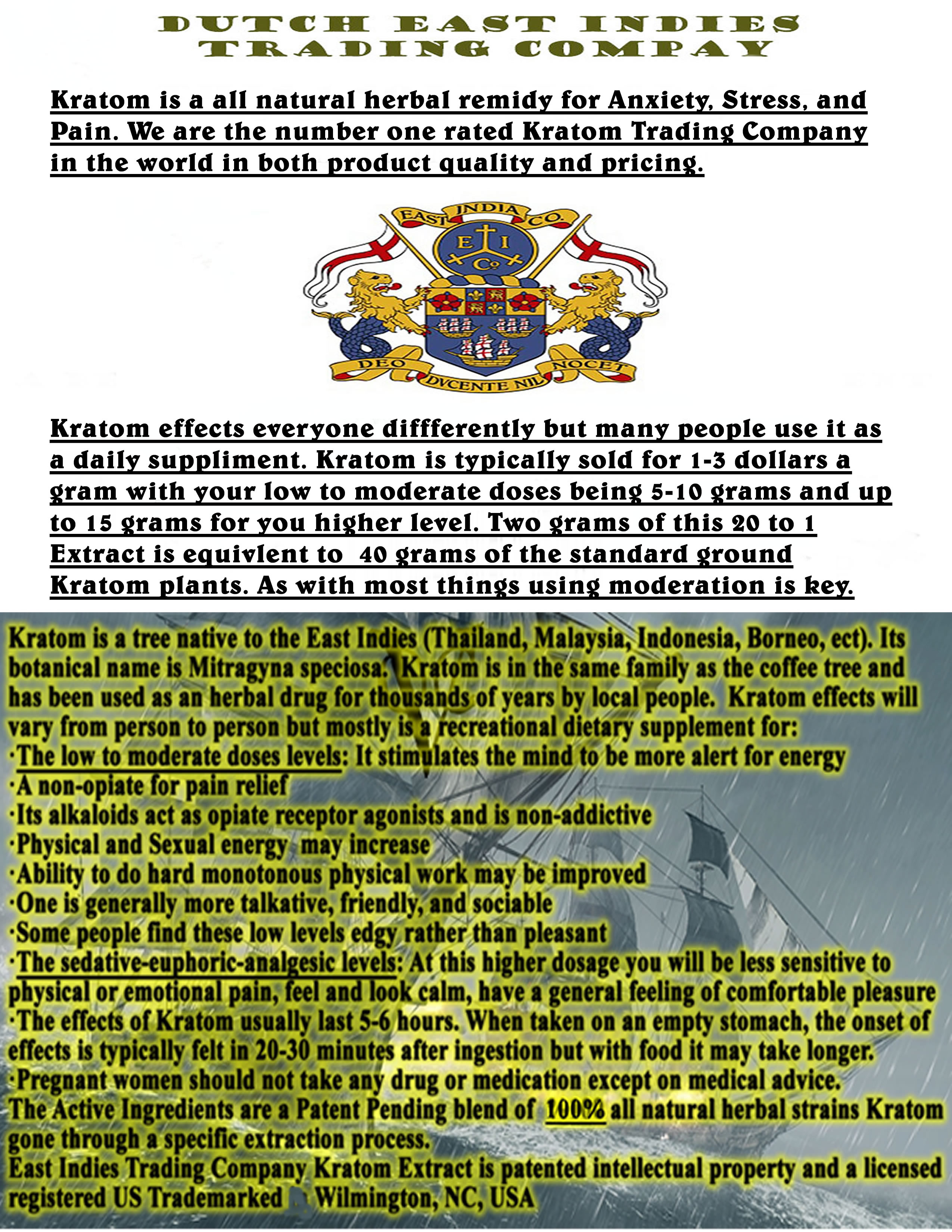 Summary:
Our moto is «American Innovation Lighting the Future.» We are building on 7 years experience of product development and design. We are on a mission to patent, license or domestically manufacture, and distribute specific new market niche products to the world wide consumer market place.
See Campaign: https://www.fundable.com/lightning-bolt-corporation
Contact Information:
East Indies Trading Company

The post East Indies Trading Company has been testing and developing, a new product to market, Kratom, as the natural herbal supplement appeared first on iCrowdNewswire.